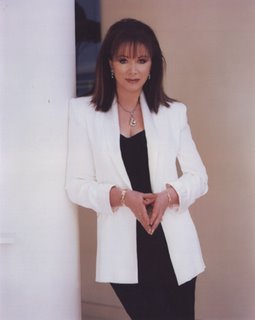 At the age of ten, my Grandma Margie planted the idea of becoming an author when she snuck me a copy of Hollywood Wives. Jackie became my image of what an author should be: controversial, gutsy, rich, powerful, famous, loaded with fabulous jewelry and of course, those luscious pool boys who’d serve me cocktails.

Even when I made a serious commitment to writing ten years later, I kinda sorta still had that image in mind. I’ll never forget that moment, I was in a gift store in Sedona, Arizona during spring break of 1994. I found a tiny statuette of a Native American storyteller for $10.95 and as I held her, I decided that I would become an author and as God as my witness, I would have my pool boy!

Six years dragged on as I wrote one crap manuscript after another. When I finished a book that I intended to sell as a category romance, I realized that I had to stop writing for publication. I know that sounds very odd, but it’s true. Writers don’t get published because they created a story that fits the new trend everyone is buying. They are chosen because of their voice, their unique way of looking at and making sense of the world.

When I saw where I was going (e.g. nowhere), I turned my soul inside out and wrote the story that became my first book. Do you know how I know I’m writing in my own voice? Well, there are two things.

First, when I wrote Hot Tamara I kept thinking: dear God, my mom is going to disown me. While the character of Susan Contreras is not my mother, there are parts of my mom in her. And while I’m no Tamara – although I always wanted a Karmen Ghia – there are parts of me in her, as well as in Isa (In Between Men), Isela (My Favorite Mistake from Friday Night Chicas) and Nellie & Lulu (Switchcraft – working title). In other words, I know the story is true when it is so honest that someone could get hurt.

Second, the writing is like I’m typing an email to my friend … but with more drama and a liberal use of SpellChecker. I know the characters are real when it feels like they’re talking through me. By the way, that doesn’t happen all the time and it often happens when I’m doing other things like showering or feeding my son. However, in revisions it is much easier to tap into what I imagine is an underground river of words. Which is why I race as quickly as possible through the first draft so I can get to the good stuff.

Out of the two screenplays and two manuscripts I had written, Hot Tamara was the first story I wrote for the sake of uncovering my voice. Publication came after the story was told and because it had authenticity, my editor took a chance on it. So when I hear writers at conferences and meetings exclaim that this will be the year she’ll get published, I hope she’ll come to understand that publishing won’t validate her as a writer. If anything, becoming an author makes writing that much harder.

Every now and then I toy with the image of showing up at some massive booksigning in a Bentley escorted by the pool boy who looks like this guy … a little fantasy never killed anyone, okay?

In all seriousness, what consumes and tortures me almost every day is the writing: am I mining those characters deep enough, am I telling the story the way it needs to be told, and why does this character who I never planned on, suddenly want to be in the story? Writing stories that are true to me and to my readers is what has made me successful.