In 2005, Kelley Armstrong wrote a book during NaNoWriMo. She had been published in adult fiction but decided to take a new direction with her writing. Her gamble paid off and now she shares her tips and experiences that resulted in a new YA series that launched this summer with The Summoning.

Chica Lit: How did you prepare for NaNoMo 2005?

Kelley: Oooh, that’s reaching back a bit far for me. I would have had an outline–when I want to write fast, I need to know where I’m going. Oh, and I remember that I cleared my plate of other work and told my agent I was doing NaNo, so I’d be “off-line” for a month. I haven’t had that luxury since (I’m doing NaNo now and have edits for my main series coming in the mail right now) But it was nice to be able to have that first NaNo clear.

Chica Lit: On those days when the blank page glared back at you, how did you just keep writing?

Kelley: Butt in chair, hands on keyboard. I make myself sit and write anything until it starts to flow. And I give myself permission to write crap. I can always go back and edit or delete it, but I can’t work with a story that exists only in my mind. It has to be on the page.

Chica Lit: At the end of NaNoMo, how many words had you written?

Kelley: Well, it was a little bit easier for me, already being published in another area. The Summoning is young adult urban fantasy, and I have an adult urban fantasy series. I’d had the idea for The Summoning for years, and had been talking it over with my agent when, within a few months, she got a couple of cold calls from editors saying that if I ever decided to try young adult, they’d like to see it. Perfect timing! So I decided I’d give it a shot for NaNoWriMo. I got most the first draft done that month…and I immediately knew I could do better. I liked the characters and the basic plot, but saw a lot of problems too. So I put it aside for about a year. In late 2006, I rewrote the first act, and my agent took that, along with a synopsis, to the publishers, where it sold. Yes, that sounds incredibly easy, but I spent many, many years doing the whole query-rejection cycle, so I know how lucky I am to be able to bypass that now.

Chica Lit: What will you be working on this month?

Kelley: This month I’m doing the third book in the trilogy that began with The Summoning. What I learned from my first NaNo is that writing fast works for me. I can immerse myself in the story and push forward without stopping and second-guessing anything I wrote the day before–I don’t have time to! So for the past three years, I’ve managed to arrange my schedule so I’m always in first-draft mode during NaNo. This year, it worked out perfect and I was able to start the book Nov 1st.

Chica Lit: Check out the website for Kelley’s exciting series at www.chloesaunders.com. For excerpts and insights in to all of her books, visit Kelley’s main site at www.kelleyarmstrong.com.

Last November, Shelley Adina needed to kickstart a book that was coming due to her publisher. Find out how she used NaNoMo to make her deadline on her upcoming release, Be Strong and Curvaceous!

Chica Lit: Please tell us how you prepared for NaNoWriMo.

Shelley: I was contracted for book 3 in the All About Us series, Be Strong and Curvaceous, due that January, and I was behind on it because of work on previous books. So a November kickstart was perfect timing for me. To prepare for the experience, I outlined my book in advance. To do that, I got the characters nailed down and wrote out a clear series of events that would put external and internal pressure on my protagonist. These pressures caused her to change, so that in the black moment “crunch” at the end of the book, she had resources within herself to do what she could not have done at the beginning. With this narrative line in mind, and a clear theme (the power of courage), I was ready to write on November 1.

Chica Lit: On those days when the blank page glared back at you, how did you just keep writing?

Shelley: It’s hard, no doubt about it. But what helps me is to go over my synopsis again, to remember the book’s theme, and to read over the previous day’s work and give it an edit pass. This seems to prime the pump, and the words start to trickle in. When they don’t, I go for a walk. Or eat chocolate. That works, too.

Chica Lit: At the end of NaNoMo how many words had you written?

Chica Lit: And then what happened after NaNoMo?

Shelley: I then had six weeks to write the second half, which was completely doable. The first 100 pages are always the hardest for me. Once those were behind me in the NaNo process, I could keep on rolling until “The End.”

Chica Lit: What will you be working on this month?

Shelley: I’m working on The Chic Shall Inherit the Earth, the sixth and final book in the series. I already had the synopsis completed and approved by my publisher (it has a few edgy elements that had to get the green light first). I know my protagonist’s character arc, and the key events are all mapped out in my head. November is all about the writing … and then I’ll be celebrating the release of Be Strong and Curvaceous, in bookstores everywhere in January!

So much for doubling yesterday’s word count! This is what happens when I write on my laptop with its high-speed Internet and email access. Dangerous stuff. Tomorrow I’ll be on the road with the AlphaSmart so we’ll see what happens.

Nonetheless, I wrote some of the hardest scenes in the book. It’s the middle of Act II when my heroine makes her major emotional transition. I can’t say more or else I’ll give it away and considering that this is a first draft, it’ll probably change.

Mrs. V asked in the comments of my videoblog if this is a fictional or nonfictional story. It’s a paranormal women’s fiction with roots in family lore. I’ve been inspired by my great grandmothers, Eduvijen Holguin Melendez and Inez Mendez Vasquez, and my grandmothers, Margaret Castillo and Maria Mendez. My character, Anna Vazquez is a mix of my grandmothers’ rebellious and independent spirits, and Great Grandma Vazquez’s ironclad strength. Another character in the book is my Great Grandma Eduvijen. When I get my act together, I’ll scan their photos and post them on the blog. But don’t hold your breath.

Today was my first day of NaNoMo and I logged in 3,750 words or 15 manuscript pages. For inspiration, I studied this photo that I found on eBay, of all places. She captures who my character, Anna Vazquez, will become at the end of the story.

Tomorrow I hope to turn in 20 manuscript pages, which will put me up to my normal speed.

I “cast” Joan Collins as Isa’s guardian angel in In Between Men. This picture says it all!

I’m interrupting our regular programming to ask for your thoughts and prayers to go out to the fire fighters who are battling the blazes out here in California. My dad is on-call and my brother, who is now with the Federal Fire Department, may be deployed if more fires break out. Last night, the Santa Ana winds died down, but its still hot and dry out there.

Thanks for your time and energy and now please enjoy my Q&A with Diana Rodriguez Wallach! 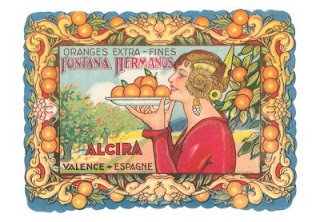 Last week the Little Dude and I did some serious gardening. We tore out a bunch of overgrown, rosemary bushes that revealed something resembling lavendar that had been smothered to death. We encountered peril in the form of black widows the size of quarters, pincher bugs and nosey neighbors. We weeded, tilled the soil, planted irises, daffodils and calla lillies and when that wasn’t enough, we mulched it all.

You’d think I’d have a rockin’ garden after all that toil but not so much. You can see the mounds where the iris rhizomes promise to break through the soil in triumph. But that won’t happen till the spring. Ditto on the daffodils. The callas are a little limp from the shock of relocating under the pine tree and I won’t see a flower until March if we have a warm winter.

The Little Dude was happy having flung dirt every which way. I was scratched, sweaty and sore but hopeful … kind of like how I feel looking at the outline of my next book. Like the garden, there’s not much to look at. I once showed the outline of Switchcraft to my agent and she immediately called me expressing much concern that there wasn’t a book in it. I explained it was an outline, you know, like the charcoal sketches that Michelangelo did detailing hands, feet and I think a nose or two of the characters he’d eventually painted onto the ceiling of the Sistine Chapel. My explanation was met with tense silence. It was a tough road but as you know, it all turned out okay for both Michelangelo and to a lesser extent, Switchcraft.

Anyway, I got to thinking that us gardeners and writers have to have a lot of patience and a lot of hope to pull it off. We have to look at the bald spots and churned up soil and imagine the the gray-green spires of the irises and their ruffled flowers. We have to hope that the vulnerable seeds will work their magic in the dark soil. Even when their brave, tender bodies break ground, we fear some careless shoe will crush it. Of course, there’s work to be done in the watering, feeding and weeding; a garden, nor a book is possible without work … sometimes very tedious and repetitive work.

So keep that thought in mind when you hit page 200 and wonder if maybe you oughta go back and rethink this idea. Or, when you get revision notes from your agent/editor/critique partner on the eighth draft of your book. In other words, when you’re this close to giving up, remember that gardens and books are only as good as those who tend to them. Wimps need not apply.

Okay, I admit that I wrote that more for my benefit than yours but if it works for you, cool. If not, sorry. I’m sure my buddy Margo Candela is blogging about something much more interesting than I am.

But if you have little people running loose in your house, may I recommend the following? The Little Dude gives it two thumbs up.